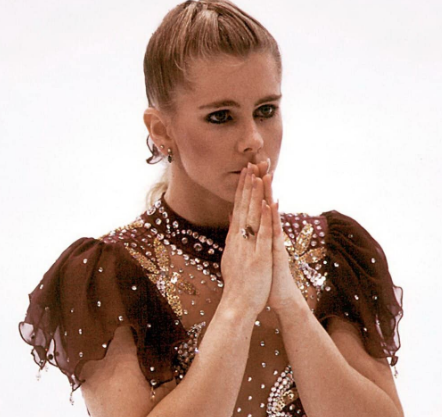 I remember watching the screen when Tonya Harding went through her good times and bad times, and the movie “I, Tonya” is a great exploration into the long series of unfortunate events. If we look at Tonya’s birth chart it isn’t surprising to see Venus and the Sun as the symbols of beauty, success and divine grace all supporting her physical identity (Ascendant) through beneficial angles. She was blessed by the stars with power to the body; strength, design, coordination, and the presence of good teachers (Jupiter).

Then we notice the Moon and Saturn. Joined together within half a degree, these two create the marriage of nurturer and authoritarian. The Moon is the symbol of the mother and this is one mother that wields a heavy stick. Both reside in Taurus making the Moon exalted and sometimes this makes mothering morph into smothering. It is a powerful force that can at times beget extreme events related to all the Moon qualities: the unconscious mind, fertility, nurturing, even water imagery which evokes Saturn (frozen) and Moon (water) creating the icy backdrop for an entire career and the setting for the attack on fellow skater Nancy Kerrigan. 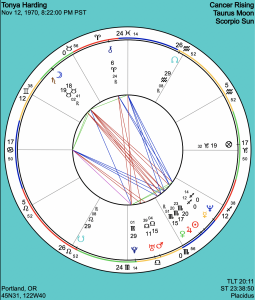 Saturn and Moon are opposite a cluster of 5 planets all in the 5th house of creativity and play, celebrations and personal expression. Three planets of the cluster neatly look to the midheaven, adding to high-powered, successful achievements. Yet this cluster is in opposition to the harsh master Saturn and the ever present mother Moon. However, it can’t be denied that Tonya’s mother helped her succeed. She introduced her to skating, she drove her to practice, she pushed her to win and she believed in her abilities. Did she overdo it? Yes, I think so. To use the phrase “tough love” is going easy on what appears to have been a perhaps abusive upbringing that made demands on a little kid who started on the ice at the age of 3.

The real evidence of this tough love is shown when we look at the stars on January 6, 1994, the date of the attack on Nancy Kerrigan. You could argue that her chart isn’t the place to look — she didn’t do the nasty deed. Yet we have to accept that she was the catalyst and on the day that it happened six planets were all in Capricorn and all were squaring her fourth house (the house of home and heart). Those squares bring some intense, rough energy, but the six planets were also in trine (a positive angle) with her 11th house — the house of Tonya’s Moon and Saturn. So the energy brought harmony to “mother’s ideal,” or you could say the planets helped her Mom, but hurt Tonya right where she lives.

Within a few days (by January 8-11), she would have 7 planets clustered in her 7th house (which does not happen often), all sextile her venus/jupiter/sun, and trine the moon/saturn combination. Not surprisingly, this was the period when she won the nationals and was named to the US Olympic team. However, this same cluster was in opposition to her Ascendant; her identity that is put forth to the world. The Ascendant is even, specifically, how the world views us. And by the 12th of January, a confession was made to the FBI implicating Harding’s associates and the story of her connection to the assault on Kerrigan was making its way into the headlines. 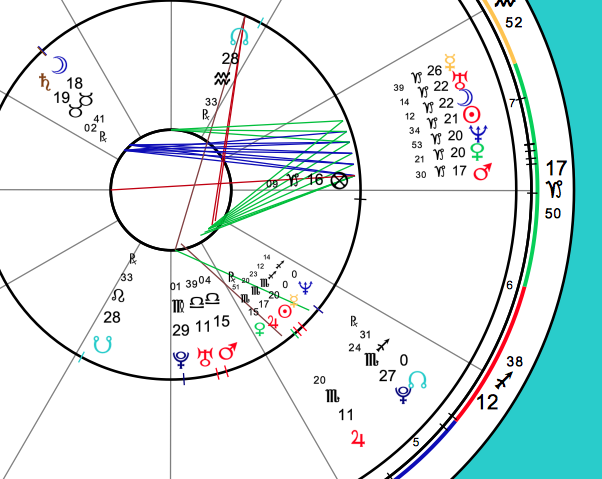 So, what can you say. If she had come to me during the previous year and asked for a transit reading, what would I have told her? It all looks positive on the chart; intensity followed by a big supply of harmony, but as is the case in much of astrology, hindsight is 20/20. Trines from malefics are not all rosy, and squares from benefics can still be sweet. The best I can say is that I would have told her “something really big is going to happen in January, and it has to do with your circle of home and work partners, and it could bring challenges to your public identity.” That just is not very impressive considering the magnitude of the tale. More experienced astrologers could have given her a better heads up. Maybe part of the lesson is that the 7th house is a house of prominence, but prominence is not always a blessing. Sometimes we get noticed for hard things. Sometimes we aim for the front page of the paper, but we wind up on cable television. Still, her story is a real testament to surviving after having impossible circumstances thrust upon her.