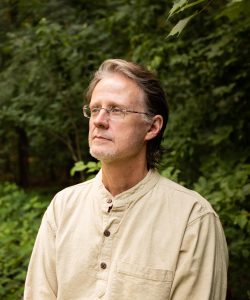 A graduate of the University of Wisconsin in Madison, Tim studied astrology under South Africa’s leading astrologer, Richard Fidler. All of Tim’s readings use Greek astrology at the core along with insight from the Vedic Lunar Mansions and house interpretations. In addition to being an astrologer, Tim has been a part of the New England Vipassana community (insight meditation) for many years. He has worked extensively with people struggling with mental health diagnoses as a Team Counselor for the Windhorse programs in Northampton, Massachusetts and Boulder, Colorado. Previously, he worked for theatre companies and did script editing for The New York Shakespeare Festival, and assisted on the world premiere productions of Sally Nemeth’s Mill Fire, and August Wilson’s The Piano Lesson. Tim also became a Yoga Alliance certified teacher of Sanskrit Mantra after receiving teachings from Rajeshwari Carmel in Keene, New Hampshire. Personal mantra guidance is also available. All mantras are taught in the tradition of Namadeva Acharya and Sadhguru Sant Keshavadas.

The Oath of the Astrologer:

I recognize the privilege and responsibility
To serve humanity as an astrologer,
Be the channel between above and below
Remain grounded, clear of prejudice, and open hearted.
Respectfully, gracefully, and truthfully
I pledge to assist those who seek higher guidance.
Direct them to the space, the time, and the way
As depicted in the map of geocosmic cycles.
I will enlighten them in the perspective
That despite trials and tribulations,
Their lives are intrinsic to an intelligent cosmic order.
These suggestions shall be made
To the best of my humble understanding,
Whether venerated or depreciated publicly in this task
I shall not falter, aware of the merit of this honorable calling.

from The Organization for Professional Astrologers http://www.opaastrology.org