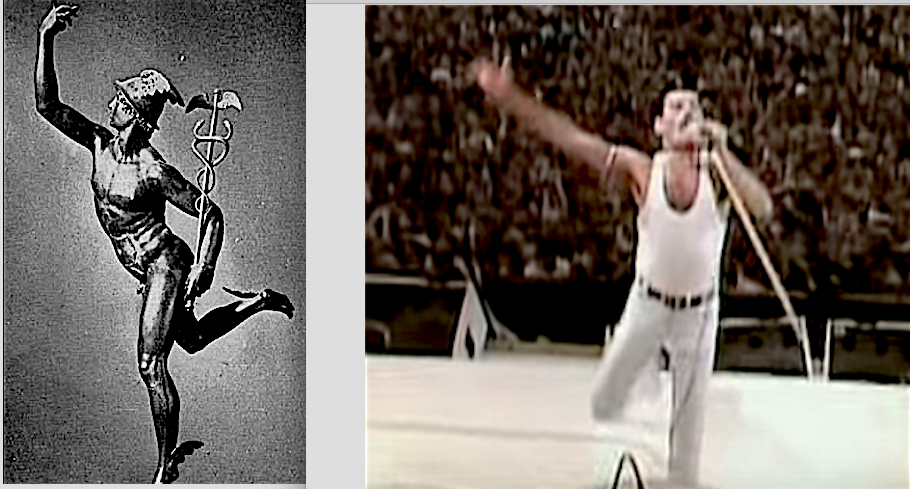 Even if you aren’t a fan of the rock group Queen, few people would disagree when I say that Freddie Mercury was one of the greatest singers in rock music history.  He had a 3-octave range that went from a bass low F to a soprano high F and he could easily change his singing style from one line to the next.  He also had unmistakable clarity in his vocalization and that, combined with the sheer power of his pipes, meant the guy could raise the roof off a stadium and this he did many times.  His performance at Live Aid in 1985 (in front of 72,000 people) is considered one of the greatest performances ever.  Many people don’t know that the classic operatic “choral” moments in the song Bohemian Rhapsody were put together using 5 tracks all sung by Freddie.

So I took a look at his chart and was not surprised to see Jupiter, Mars and Venus all clustered in the 2nd house; the house of the human voice. [I have heard there are disagreements about the birth time, so some interpretations would disagree]. Venus blesses his voice, Mars powers it, and Jupiter expands the whole scenario beyond the average human capacity.  The 2nd house is also the house of the mouth, the throat and the neck.  Freddie even had  36 teeth — 4 more teeth than most of us.

The other big surprise that’s really no surprise is finding his planet Mercury exalted in Virgo; the one sign where Mercury finds its most efficient expression.  He is Mercury when you see him on stage. Sort of a puckish character, he is a bit of a trickster with just enough androgyny to keep it interesting.  All of these are characteristics of the planet’s symbolism.  Mercury is the Peter Pan of planets.  Freddie even dances around with his trademark broken microphone stand which takes the place of the archetypal Hermes’ caduceus.

I was ready to close the file on Freddie Mercury, but at the last minute I took a look at his fixed stars. I usually avoid the fixed stars because the interpretations are sprinkled with a lot of bad news. Do we really need to know our stars can say “dies from despair” or “burns to death in own house” — is that information even helpful?  Probably not.  But Freddie’s Ascendant line (the horizon) was blended with the star Coxa (Theta Leonis) when he was born.  This is a star in the constellation Leo and the scriptures foretell that a person with connections to this star finds success and undertakes many voyages, etc., and I didn’t think much of it until I saw the last phrase in the entry:  “one who releases captives.”  That stuck with me.  That describes Freddie perfectly.  This shows up in many songs, like I Want to Break Free, but especially his lyrics from Bohemian Rhapsody:  “Easy come, easy go, will you let me go? Let him go! Mamma Mia let me go!”  It’s all over that song, but also in Keep Yourself Alive and We Are the Champions:  “I’ve done my sentence, but committed no crime.”  It even appears later in Under Pressure with David Bowie: “watching some good friends scream Let Me Out!”

The additional revelation is that Freddie Mercury, as the embodiment of “one who releases captives,” is a person who taught thousands of gay men in the 1970s and 1980s that it is okay to be gay and to even look and act like a gay man.  Attackers may still be around the corner, but you can  discover your tribe and find a place on Earth where you too can be embraced by your community.  You no longer have to be held captive to restricting ideas of traditional sexual orientation.

This shows how astrology is all about symbolism, not science.  “Releases captives” can mean that you pay the bail for your drunken friends, yes, but more likely it will indicate the act of setting someone free in a symbolic way, and that can show up in many ways for any of us with that indication in the chart.

It’s easy to see the stars at work in Freddie’s story and I’m glad that Mercury walked here again for 45 years. What an inspiration!  I wish we could all have such earth-shattering support from the Gods and perhaps we do — but until that time blossoms we have to be content with working off all kinds of karma from past lifetimes, when we sat as a judge during the inquisition or we slaughtered cows, or we wove rope for the hangman’s noose, etc. You know. The usual stuff.

One thought on “When Mercury Walked Among Us”