A few years ago I worked with a millennial who had an abundance of charm. He was tall and thin, sort of a David Bowie from back in the Ziggy Stardust days. He had been hospitalized for many months and was getting his feet under him again. He told me about the deep stuff that had happened to him in his life, including hearing voices and being tuned into another realm. One day he watched what he called “the female version of himself” emerge from his own torso in bright blue light. She sang to him in a language he had never heard before and he considered this one of the most beautiful moments he ever had. It was an amazing experience to hear about.

I was to find out that people can go through what is called a spiritual emergence, when something deep within us springs forth and interacts with our daily awareness in sort of a waking dream. This is not to be confused with a drug trip, though of course such things may overlap. This is more about the soul sending us a message, usually something wrapped in symbolism that is played out in an elaborate and often bizarre fashion. Long sequences are visualized, often with moral themes and they usually happen to a person when they are alone. Sometimes this state is associated with things like Moses at the burning bush, or the prophet riding Pegasus to the heavens. It can last only a moment, or go on intermittently for many months. If you have an interest in this, Stan Grof is one author to check out. When the Impossible Happens: Adventures in Non-Ordinary Reality and The Stormy Search for the Self: A Guide to Personal Growth Through Transformative Crisis are two of his works that can really bring you up to speed on a fascinating topic.

When someone has Uranus really close to Mercury in their birth chart, this can be a planting ground for such experiences to flower at some time in a person’s life. Usually Pluto will be involved, too, as it is famous for strange extrasensory experience. In descriptions of the Mercury/Uranus combo we find Robert Hand writing a lot about speeded up thinking, becoming fascinated with puzzles and mysteries and he uses the phrase “getting insights out of the air.” Under certain conditions this arrangement can set the stage for a mind that becomes a highly tuned spiritual receiver.

Guy Ballard was born in Kansas in 1878 and in the sky on that day Uranus and Mercury were only 15 minutes apart. That’s one-fourth of one degree in the 360º circle of the sky. A tight conjunction, to put it mildly. This is pioneering and innovation in an intense way, and this pairing was also conjunct the star Regulus at the time, considered the most fortunate star in the sky. With Mars only 6º away we now have a major steroid injecting even more power to the combination. And all in the divine sign of Leo, with Ketu and the Sun, and all in the 9th house of moral philosophy and religious beliefs. Wow! If this guy came to me for a reading I would just try to stay out of his way. 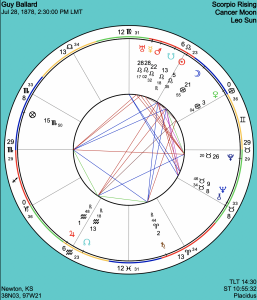 Ballard would go on to co-found a religious sect called the I AM tradition, complete with sacred writings and branches all over the world. He’s in the vein of what’s called the Ascended Master teachings; a sort of ancient type of Buddhism that mixes Helena Blavatsky and other theosophical occult teachers. Unconventional, yes. But sprinkled with beautiful poetry and wisdom.

Mount Shasta in California was the sacred ground for Ballard and today you can go there and find retreat centers, meditation halls, trinket stores and all kinds of exploratory characters. I haven’t visited it myself yet, but it’s on my list. The mountain has a long history of strange stuff that goes back way before Ballard. The Hopi considered it a dwelling for reptilian peoples, the Klamath called it the home of Skell the Spirit Chief. Native Americans considered it too sacred for ordinary people to visit. Only the chief and the shaman would venture there above the tree line. The list of stories about this mountain is too long to share here. Dwarfs, petroglyphs, underground cities and tales of caverns lined with gold, UFO sightings, ancient civilizations: it goes on and on, further and further.

In the fall of 1930, Ballard was hiking on the mountain, doing survey work as a mining engineer for the government. He describes what happened in his book Unveiled Mysteries:

“The morning in question… I looked around, and directly behind me stood a young man who, at first glance, seemed to be someone on a hike like myself. I looked more closely, and realized immediately that he was no ordinary person. As this thought passed through my mind, he smiled and addressed me saying:  ‘My Brother, if you will hand me your cup, I will give you a much more refreshing drink than spring water.’ I obeyed, and instantly the cup was filled with a creamy liquid. Handing it back to me he said: ‘Drink it.’  I did so, and must have shown my astonishment. While the taste was delicious, the electrical vivifying effect in my mind and body made me gasp with surprise. I did not see him put anything into the cup, and I wondered what was happening.

‘That which you drank,’ he explained, ‘comes directly from the Universal Supply, pure and vivifying as Life Itself, in fact it is Life, Omnipresent Life, for it exists everywhere about us. It is subject to our conscious control and direction, willingly obedient when we Love enough, because all the Universe obeys the behest of Love. Whatsoever I desire manifests itself, when I command in Love.’

To Ballard, the person revealed himself as Saint Germain, a French alchemist who had lived in the 1700s. Some writings refer to him as a “Lord of Civilization.” I’m not sure what that is, but I think it probably isn’t far away from someone like Skell, the Spirit Chief of the Klamath. Saint Germain is said to have lived many notable lifetimes on Earth and he provides guidance whenever consulted. Edgar Cayce, the famous sleeping prophet said that Saint Germain is “present when needed.”

After interacting with the Saint that morning, Ballard then had an experience with a mountain lion that came and stretched out at his feet, playful as a kitten, which to him became a symbol for the final conquering of all his fears. Leo symbolism shows up pretty clearly here. He writes that a lot happened from August through October of that year, and part of it involved automatic writing, when words come out onto the page without any intellectual thought or craftwork. These writings became the foundation of the I AM teachings. 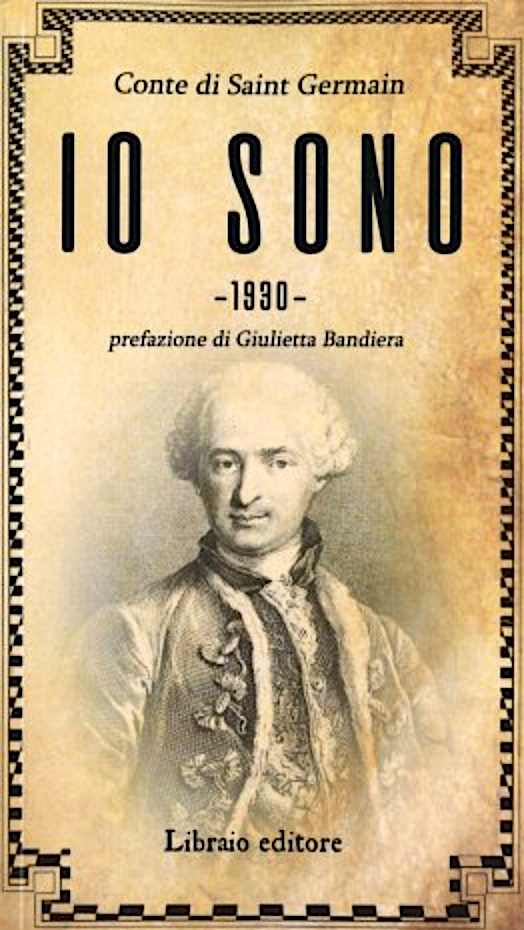 In the coming days, Ballard had more meetings with the Saint who took him on journeys into the past and to the future. With his wife Edna (a well-established mystic author herself and a professional harpist) the Ballards would begin to preach and write about finding sanctuary for the human race, and solving the problems of nations; high ideals, harmony, and the rejoicing of hearts. Guy’s speaking voice was a style that was quite flowery, almost London-esque for someone born in Kansas. He sounds a lot like Tolkien if you listen to some of the recordings online.

My guess would be that the meeting with Saint Germain happened around September 30th of 1930, when Mars and Jupiter joined Pluto near the natal degree of his Moon, and in the 8th house. The 8th is the dark, watery nest of life and death, where transformation makes its home. A Scorpionic place where young Goths sip absinthe with glorious angels and goat-headed midwives. Best to wear black and go with the flow! Great things are born in the 8th house, and Ballard may have had his night-of-the-soul in relation to this house. Barbara Pijan describes moon in the eighth house as having “emotional extremes of sudden upheaval” and “manipulation of great unseen life-energy forces.”

I think if I had been on Mt. Shasta that morning, I might not have seen Saint Germain. But Ballard obviously did, in his own way, just like my friend saw his feminine self singing a song. These things happen in a realm that is beyond understanding to most of us, and the least we can do is give it some respect. Good things come from these rare moments, and we never know what kind of painful journeys people go through on their way to finding relief from suffering. At its height, the Ballard’s organization had a million followers just in the United States alone. Besides, you’ve got to love a guy who can talk with the high spiritual entities and also have his own pet mountain lion. Did you or I do anything so special lately?