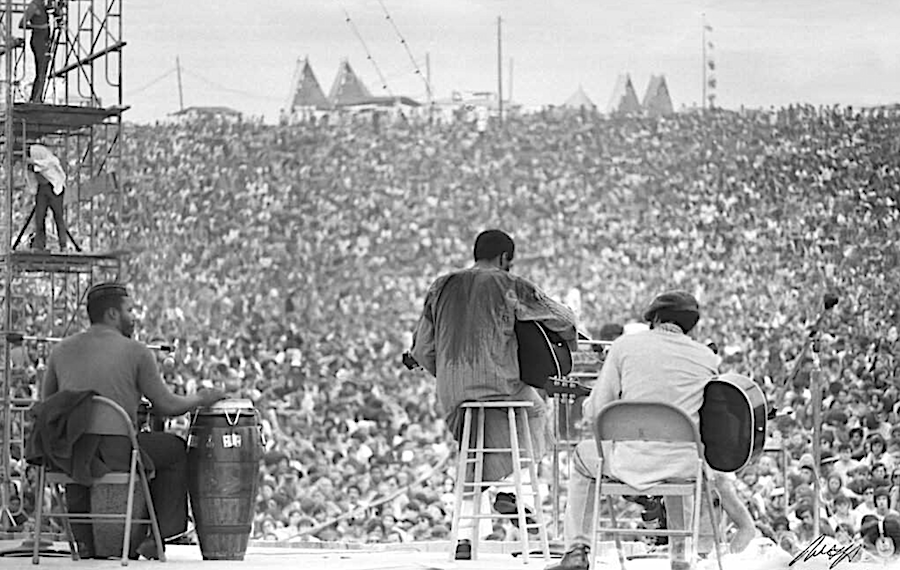 On a summer day I scored tickets to see guitar legend Richie Havens in Madison, Wisconsin. It was a show near the campus in a small club. Since I wanted a good table, I went early and had dinner.

The downside was that in order to keep the table, I had to keep buying beer after beer until the 9pm start and by then I was pretty loaded. I was at that age when soda just didn’t occur to me. I enjoyed the show, though, and he was beyond great. His energy is almost overwhelming and his guitar nearly starts on fire. Then he cools everyone off with some warm love ballads. He was right in front of me, and it was a bit like sitting in the presence of a Sun God. He sobered me up. He was that intense. I remember he was also totally humble and kind; a soul of love, and thoroughly lovable.

Woodstock of 1969 was called An Aquarian Exposition: Three Days of Peace and Music. The local newspaper article that kept people informed of the approaching concert was titled “Update on the Aquarians” and most locals were not happy that a hundred thousand young freedom lovers would be descending on them. It turned out to be more than 400,000 with many more stuck on the highways unable to get within thirty miles. Most of us have never seen a crowd that large (Boston’s Fenway Park in comparison is 37,731 capacity and Michigan stadium is one of the largest at 107,000), and big music festivals were still a fairly new thing at the time. Interestingly, it was held during a time of widespread illness in the US. Come on, millenials, what are you waiting for? Let’s get things rocking! I don’t hype Woodstock, only to say that some of the greatest musical communicators in history performed that weekend.

In India the word for Aquarius is Kumbha. Every twelve years (based on the cycles of Jupiter) they host the Kumbha Mela which is the largest gathering of humanity on Earth; the 2001 event drew nearly 60 million from all over the world in the name of spiritual discussion and debate. Aquarius and Kumbha are both names for the astrological water-bearer who symbolically can quench our spiritual thirst; the sign of humanitarian ideals and what the ancients called “Good Spirit.” The event in India is held on one of four sacred sites, all on sacred rivers. Aquarius for them is a pot of water or sometimes a pot of amrita, the elixir of immortality.

Aquarius is our next age, as the time of Pisces falls away and we move into a new 2160-year period. It may have already begun, and I like to think it started at Max Yasgur’s New York farm when Richie Havens stepped onto the stage. Aquarius in our charts represents the 11th house qualities: inter-connected knowledge, computers, networks and the fruits of our labor. But it is also: friends, mentors, hopes and dreams realized, and the time that the rules are broken and changed for the better.

The social idealism of this sign is peppered all over the festival. Drumbeat of the people is a phrase associated with the sign, along with dance events, friends, group activities, strong desires and at times even mob mentality. The planet Uranus shares some of these qualities, with sudden electric bolts of energy, flamboyance, eccentricity, and always the quest for freedom.

Aquarius is all about waves of all kinds: social, electrical and water waves. At one point during the festival there was grave concern that the rains would create a mass electric shock event due to the wiring to the stage, and thankfully that didn’t happen. But everyone did get thoroughly drenched with Aquarian rains (according to Max’s son Sam Yasgur it was one of the rainiest summers on record) and the dreamy hay fields became fields of mud. The music played on.

The Boeing 747 jumbo jet had been unveiled that year and only a few weeks before the concert the first humans had set foot on the Moon. It was certainly a time of innovation and sudden airy leaps ahead.

Sweetwater was the band selected to play first, but the traffic kept them from arriving on time. All the artists were having difficulty getting there and many were helicoptered in. Richie Havens showed up so he was the one to play first; an Aquarian who had been born on January 21st with his Sun at a very fitting first degree of Aquarius.

His Mercury is also in that sign and on the day of the fest (August 15) he had six planets clustered in his 12th house. This is often called a house of prisons and monasteries, and the bridge to the spirit realm, but it is also called angel on your shoulder when it has a stellium of planets. The first song he sang was coincidentally titled From the Prison, but he is mostly remembered for the final song of his performance: Freedom. Catch it here, if you want to watch the stellar live performance.

It was this song that became the most memorable anthem of the festival and a lot of people don’t know that he made up the song on the spot. He borrowed a few lines from the old spiritual Motherless Child, but mainly he was pulling ideas out of the air; a classic Uranian method for downloading knowledge to share. Talk about having an angel on your shoulder, this was it. He made up the song because he had played about 2 hours and didn’t know any more songs. They kept asking him to play longer because the next acts were still having trouble getting to the site.

Richie was wearing a long orange Indian style kurta, so he looked like he’d just walked in from the Kumbha Mela. He was 28 years old at the time, and was right in the middle of his Saturn return. If there is a story to share of a fortunate Saturn return, this would be the one. In fact, on the day of the concert Saturn was conjunct his own Saturn within 1º. What a grand way to find your career path and fine tune how you want to be in the world. Some technical verbiage here, but if you study the stars at all you’ll like this. He was also having a Mars return, also within 1 degree. To make the story even more compelling, at 3:55pm that day the planet Jupiter arrived exactly at his Ascendant degree (where his eastern horizon was at the time of his birth), and it was precisely to the minute. By 5:07pm he was at the microphone. Uranus was only about 3 degrees away from his Ascendant and the Sun was square his own Uranus at less than 1 degree.

What a recipe! This is a planetary arrangement that wields a lot of power, even foreboding and nervous power. If I was doing a reading, I would say this would be a day to step lightly. As it turned out for Richie, it probably was not all fun. Asked to play first (ahead of schedule), searing heat and a half-finished stage, then pressured to play and keep playing. And he did it. If you made an astrological cookbook, you could put this day in the chapter titled Food of the Gods and have warnings about it being poison for those who aren’t prepared.

Also joined and within 2 degrees was Neptune and his Moon, which aligns with the star Beta Centauri. This star is all about humanitarians and success with the masses, but most of all it is about unconditional love and being lovable. It signified those things long before Richie ever showed up in our world. And he was lovable for sure. We can all be lovable, but he got an extra dose. Of course at some level he was just one of many ambassadors to the new age, and Swami Satchidananda as the opening night speaker was one of those, too. But no doubt, Richie Havens was someone who was tapped to help usher in our long era of Good Spirit.

I’ll never forget that show from the front row, he was that good. I still get electric goosebumps just thinking about it. 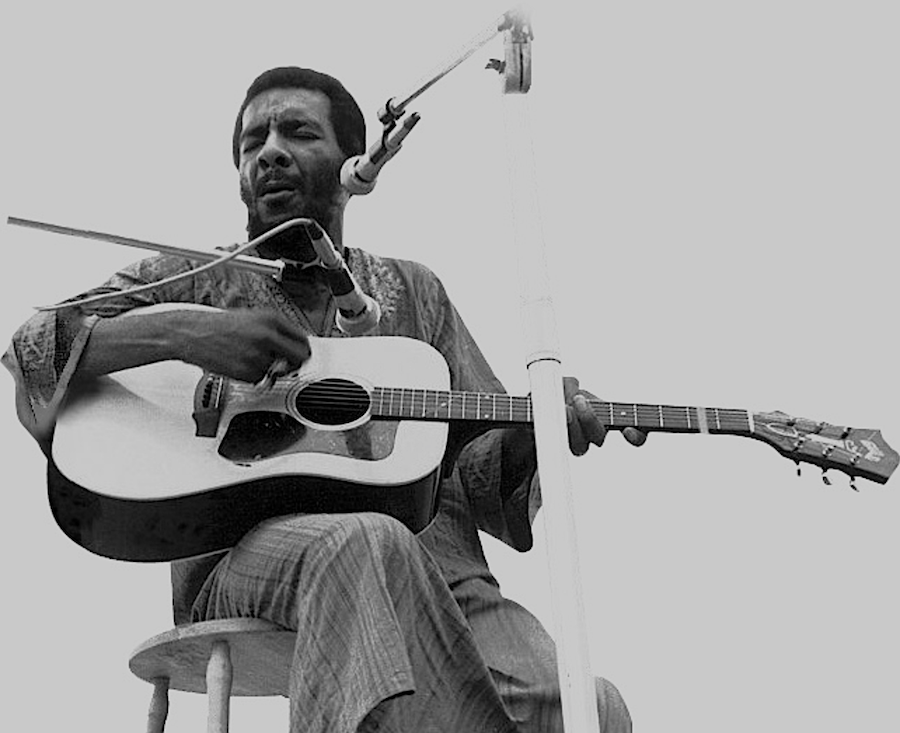