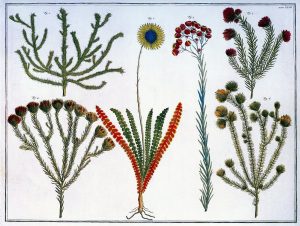 “If you dry chestnuts (only the kernels I mean), both the barks being taken away, beat them into powder, and make the powder up into an electuary with honey, so have you an admirable remedy for the cough and spitting of blood.”

I never met the person who preserved that nugget of wisdom, but I can tell you a lot about him. He had what you might call an electric personality. He was talkative and high-minded, almost an evangelist. Even a daredevil.

I know this because the quote comes from Nicholas Culpeper. He was an Herbalist and student of Physick & Astrologie, who treated diseases by creating a birth chart for the moment a patient first becomes ill. He left us the time and place of his birth and even though it was in 1616 we can accurately reproduce his own chart (his signatory seed). We must include a 10-day calendar change which we do for any date before 1752 (for the US, UK and Canada). For other countries, the change was adopted in different years. Write to me if you need a list. 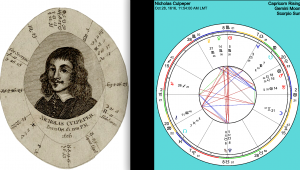 With a powerful Venus-Uranus combination he was unconventional and impulsive and had moments of beautiful revelation, perhaps even periods of real epiphany. Culpeper would die young, but first he would write 79 books and translations that catalogued hundreds of plants and their medicinal properties. Of the strawberry he wrote, “The berries are excellently good to cool the liver, the blood, and the spleen, or an hot choleric stomach.” I totally agree! My stomach yearns for the strawberry, especially on a summer day. Of Lavender:

“Mercury owns the herb; and it carries his effects very potently. Lavender is of a special good use for all the griefs and pains of the head and brain that proceed of a cold cause, as the apoplexy, falling-sickness, the dropsy, or sluggish malady, cramps, convulsions, palsies, and often fainting. The essential oil drawn from Lavender, usually called Oil of Spike, is of so fierce and piercing a quality, that it is cautiously to be used, some few drops being sufficient, to be given with other things, either for inward or outward griefs.”

Culpeper’s grandfather, a minister, taught him Greek and Latin at a young age. He studied at Cambridge (but had to leave without a degree) and after apprenticing to a London apothecary for seven years he set up his own shop in the poor district of Spitalfields and was determined to treat people who were often facing starvation. He was immediately seen as a rebel because he insisted on seeing patients in person while other physicians would simply examine the urine and write a quick prescription.

Many professionals then treated only the upper classes and often used astrology in medical treatments, but Culpeper linked plants to the planets and sent people home with simple recipes and cures that could easily be made from the plants that grew locally in England. He also translated Latin works into English so that learning about health could be available to all, and this dissemination of knowledge riled the Royal College. Average people were just too ignorant to be trusted with information about their own health, they thought. Sound familiar?

He often treated people for free, which would get him into even further trouble. He was labeled a witch, of course, and even though he was treating upwards of 40 people a day he was shunned by the establishment. He was later cleared of the charges. He signed up to fight in the English Civil War where he became a battlefield surgeon and was soon made captain of his own infantry.

His astrological method of assigning plants to signs and planets mirrors the system used in today’s biodynamic farming which Rudolph Steiner made widely known in the U.S. in the 1920s. You’ll find many farmers in New England today planting and harvesting based on the cycles of the Moon and other heavenly bodies.

When we look at Culpeper’s natal chart, we find a life of hard knocks since Saturn and Pluto are tightly together (the hellish conjunction that marked the year 2020) and opposite his Sun. This means a life of hard lessons, organized obstacles, and inevitable injury (aspecting both soul and body). Happily, we find that his Mercury in Scorpio is known for recording cycles of hidden knowledge. Moon in Gemini is a link to learning from the unseen airy elements of the forest and a Jupiter in Sagittarius shows a priestly, tireless worker who holds on to the highest ideal.

Perhaps most telling is his Moon at 21˚ Gemini joining the fixed star Capella. In India this star is called Brahma Ridaya (The Heart of Brahma) and has connections to the nadis; linked centers that run the course of the subtle human body much like the root system of plants. Anyone with this star prominent in the natal chart would be a persistently curious person, one who longs to explore networks of the unknown. It is called the singer that leads the procession. In ancient Egypt, five temples were oriented to this star and it was key in the worship of Ptah, the God who created the world via the thought of his heart and the magic of his word. One of his attributed writings is about the divinity of attending to another person’s need.

Culpeper’s Ascendant degree (2˚ Capricorn) lies on the upper bow of Sagittarius near the star Polis, reflecting a high-minded person who achieves the position, but later falls from grace. Finally, his Venus sits at the Divine Gate in Scorpio, the degree where Venus (although debilitated) bursts forth in a grand design; a muse of the finest flora and fauna. His damaged Venus is best illustrated in his love for Judith Rivers; the lover he planned to sail away with, to the Netherlands. Sadly, her carriage was struck by lightning and she was killed (a most intense Uranus/Venus aspect, only 12 minutes from exact). With wider aspects to Venus from Mars and Chiron and Pluto and Saturn, the death is not surprising.

He died of consumption at 37. Had he lived longer he might have amassed enough info to rival the plant knowledge attained by South (or North) American shamans, but still he did so much. By gathering all of the lore of the local plant healers he saved knowledge that might have been lost. Much of his work influenced our modern healthcare, for what are many pharmaceutical products after all? The same substances, just dressed in pill form with preservatives and an obtuse nomenclature. Lily of the Valley has cardenolides that are used to treat heart disease. Lemon balm is in products that treat cold sores and PMS. Plantain is the major ingredient in over the counter laxatives. An argument could be made that we have blinded ourselves to the true nature of what plants in our world can really do. We kill dandelions in our back yards and then go to the store and buy dandelion tea. Why do dandelion plants keep coming back even though we kill them off? Because they grow in places where there is toxin. More toxin equals more dandelions. It is a plant designed to help us rid the body of toxins, as a diuretic. They were once called “Piss-a-beds.”

Culpeper’s motto in the 1600s seemed to be the same thing we hear today: affordable health care for all. He would probably walk around today wearing a t-shirt that says “Informed Consent!” or “Learn the Risk!” His philosophy reminds us that healthcare systems need to constantly be held to a prime directive, to put patient needs first. From the intro to his 1835 edition of The Complete Herbal he writes, “I consulted with my two brothers, DR. REASON and DR. EXPERIENCE, and took a voyage to visit my mother NATURE, by whose advice, together with the help of DR. DILIGENCE, I at last obtained my desire; and, being warned by MR. HONESTY, a stranger in our days, to publish it to the world. I have done it.”

I’ll leave you with his thoughts on Horseradish: “It is under Mars. The juice of Horseradish given to drink, is held to be very effectual for the scurvy. It kills the worms in children, being drank, and also laid upon the belly… the distilled water of the herb and root is more familiar to be taken with a little sugar for all the purposes aforesaid.”

Special Thanks to Tel Asiado. Order a reading from the Ness of Astrology. You won’t be disappointed! 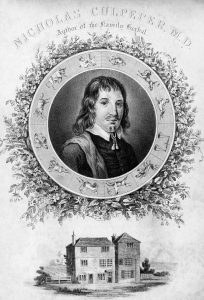