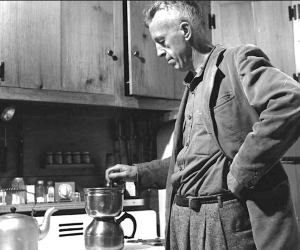 It seems that the people who heal us the most in life are the ones who have lived through our own dilemmas. A good physical therapist is the one who broke her leg in a skiing accident. The psychologist who gets it is the one who walked through madness and returned. Bill W. spent much of his life in dark depression and a haze of alcohol and he co-founded Alcoholics Anonymous. He, along with fellow healers, wrote the twelve steps to get sober and the twelve traditions to help you stay that way. He became a real giver of the skills needed to live a civilized life. He is the definition of a wounded healer, and people still say, “if it wasn’t for Bill, I’d be dead.” The trademark of his healing method was spiritual, and to always have one other person with you on the journey. You stay healthy yourself by supporting someone else to stay healthy.

He was raised by his grandparents as his own parents were not present. He fell in love at 17, but his girlfriend died. He left the University of Norwich after the first semester because his panic attacks were crippling. When he took his first drink he felt he found the “elixir of life” and he could talk without stammering, find new friends and suddenly the anxiety was gone. But he couldn’t stop drinking, often going on a poisonous binge for multiple days.

But somehow there is a link between poison and medicine. Today, our prescriptions are often about finding the right balance of a slightly dangerous substance. The Yew tree, for example, is a poisonous plant that is used to slow the growth of cancer. Ever since ancient times the nastiest poisons were used in small amounts to spur healing. Hemlock was used to reduce pain during surgery (not sure I want to picture what early surgery looked like, I can’t even stand it today). Medusa, the Gorgon, was famous for her hair of snakes, but it was also written that the blood from one side of her body was poison and blood from the other side could bring the dead back to life.

Asclepius was the ancient God of medicine and people traveled many miles to find healing at his temples in Greece and Egypt. You’ve seen his symbol: the staff with the inter-twined snake. The legend is he was killed because he was saving too many people and Pluto was put out at not getting enough new souls. Asclepius’ teacher was Chiron, the centaur who in astrology is the comet often called the Wounded Healer. He was a great teacher to the Gods’ children, and although he was the greatest healer he was unable to heal himself and he died from a poisoned arrow.

Bill W., then, would likely have these elements present in his birth chart and if you take a look you will not be disappointed. His Sun at 3 degrees Sagittarius is in line with the fixed star Yed Prior (only 20 minutes away). This star has always been associated with poison and is called The Man of Death. But it is also called the Ruler of Medicines. It marks a person who is overly trusting and can be easily seduced. Perhaps hypnotized by poison, in this case alcohol. In Babylon, this star was where you find the snake God Nirah who was a man with snakes for legs. In medieval Islam it was called Snake Charmer. So if you are born with Sun or Moon or Ascendant in this part of the sky, rest assured that your pain in life can also be the source for giving others healing. This can be true any time, but under these conditions, more true. More likely.

An ever-present wound for Bill is obviously in the 2nd house where we find Mars, Mercury and Uranus with Saturn not far away. The house of domestic happiness is filled with nervous tension. Uranus and Mercury so close together is a recipe for having your nerves electrified, but also a significator of new and innovative ideas. The 2nd house is also the realm of the mouth and teeth and voice so it isn’t surprising Bill said he was usually tongue-tied. I think that’s probably a huge understatement to the depth of his anxiety. He was also without resources (2nd house) for much of his life, but his colleagues insisted he stay unfettered by a regular job so that he could devote his life to building the written materials and furthering the work. But even after getting the main AA writings published in 1938, his house faced foreclosure.

His Venus rides just under the Asc line, along with Chiron, making him a beautiful healer (or a wounded designer). Neptune’s influence is intense here, keeping confusion in the mix and it shows that substances would be a continual danger in the life whether they are being used or not. Anyone with Neptune and Pluto aspecting their Venus and Ascendant will likely have this quality.

At Bill’s moment of birth, Chiron was appropriately joined to the fixed star Foramen. To Babylonians this star was the dwelling place of the deity Oannes, known for teaching humans the necessary skills of civilization. How to thrive as part of a group, with fundamental teachings that are necessary for a sane community of people. Doesn’t that sound like AA? Also, writers have determined that great dignity is symbolized in the sky right here in Foramen, and you can also find the aim of everyone at the local AA meeting: usefulness.

His chart shows no planets in Earth signs. This can indicate a person who longs to get grounded, a ship at sea. It was this condition, ironically, that led him to be the beacon to so many others. His long struggle to find ground, a battle full of starts and stops, gave him the experience to help teach everyone else how to work toward it.

It’s important to mention that while doing his most important writing, Bill had frequent and terribly dark depressions. Sometimes we assume that we have to feel great in order to make a great contribution. It just isn’t so. Bill did have moments of spiritual uplift though, and credited numinous experiences for his progress. He held seances in his house (away from disapproving friends) and he used LSD in medically supervised experiments in the 1950s. Jupiter at 9 degrees Leo denotes spiritual communications (he was also a spellbinding storyteller). Check out the trailer for the great documentary titled Bill W., with this link.  Or better yet, buy the film here .

The scope of Bill’s work is just dawning on us now. AA is present in over 170 countries and the books can be found in 60 languages. His work led to the core materials used in OA, NA, Alanon, Gamblers’ Anonymous, and over fifty more support groups. Aldous Huxley called him “the greatest social architect of our century.”

Perhaps Manilius understood Bill the best, when he wrote about that part of the sky where Bill’s Chiron is found, the Keel of the ancient constellation Argo: “[people] born under Argo are the guides who guide our ships over the trackless deep; it is through them that land meets land and the whole world’s wares are summoned with the winds to supply men’s diverse needs.” Astronomica, Book 5.

Special thanks to Richard Fidler.