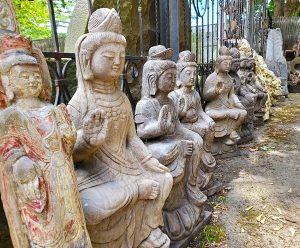 Now and then we walk into a room and you can tell something good just happened. Like it was a birthday and the song just finished. Or a good story was passed around the table. The air is a bit electrified and though you’ve just arrived, it’s clear that maybe a dinner was shared with real appreciation. It’s as if the laughter leaves traces in the room even after the people have gone.

A meditation hall is like that. Somehow the activity done in the room leaves behind fingerprints. I have tried to explain meditation to people who have never tried it. It can be difficult. I say something like: a gym is where you work on your body, and a meditation hall is where you work on your mind. That opens the discussion, but to some the idea of sitting still makes them smile and walk in the other direction. That’s even before I explain that for ten days you can do no reading, no journaling or drawing, no exercising other than a walk, no phone, no laptop, and no meat. And no talking except for a few questions in the evening. But if they are still interested they start to hear about the yes’s. Yes to quiet and sleep, yes to dreams and memories, emotions, awareness, feelings, lessons, peace, sensations, cushions and colleagues, and the best curried cauliflower they might ever taste. The tradition that found me was the Vipassana method, which means ‘to see clearly.’

Satyanarayan Goenka was a leader in that method. Some sources give his birthday as January 29th, but most I’ve found agree on January 30th. Without a birth time, results can be limited. Yet a lot can still be indicated about the life, especially from the location by degree of the planets on the day he was born. The idea is that each degree of the zodiac is like a note on a piano that has 360 keys. The planets strike a tone that has something to do with how we are made.

Goenka was born into a prosperous family of great success. After many years of working in a fast-paced business world, he began to have migraine headaches that plagued him for years (Chiron in Aries square to his Mercury would show this likelihood as Aries represents the head). He was treated with morphine and nothing seemed to help long term. He kept seeking a more effective pain-killer. This led him to specialists in Switzerland, Germany, London and Tokyo, but he found no answer. He returned home and eventually gained relief from a Burmese meditation teacher, Sayagyi U Ba Khin. Then Goenka found more than relief from headaches. He would go on to help establish meditation centers all over the world.

Goenka was a strong teacher in a line of strong teachers, but his influence cannot be underestimated. He trained about 1300 assistants. It is largely because of Goenka and his wife Mataji that we in the west have come to know that meditation can have direct physical benefits and that it can be done without adherence to any religious tradition. You can believe whatever your heart directs; this practice is more about just being a human living in the world. Together they taught Atheists, Jews, Christians, Muslims, and people from all philosophies how to just sit and wait; to come back to the breath and the body and notice the truth as it is, not how we want it to be.

The planet of moral philosophy is Jupiter. It is called Guru in India. In Greece it was the King of the Gods. In Rome, the God of Rain. Zeus. Ganesha. More specifically, it represents growth and expansion especially of our awareness and ability to support others. Also physical expansion as Jupiter can give us extra pounds. Many words are in Jupiter’s realm: travel, devotion, wealth, sacred places, filling, abundance, jovial, blessings and the teacher within the community. Guru is not to be confused with a Yogi, the teacher who lives in the cave and withdraws from the world. That’s more the symbol of Neptune.

We find Goenka’s Jupiter at 13 degrees of Sagittarius (Tropical), the sign where Jupiter is pleased to be in his own home. By looking through Adriano Carelli’s book, The 360 Degrees of the Zodiac (and using his system of no zero degree) we find this description:

A master holding an open book in a very untidy but not uncomfortable room. The native will set his shoulder to the wheel in anything he undertakes and will be able to give his intelligence the full support of splendid gifts…the native will emerge as a master in his own line, even a great master. There might be a suggestion of stiffness about him, something dignified and formal which will impair his popularity. But there will be no pettifogger [shyster] in him; on the contrary, there will be an outward carelessness and an inward bent to enjoy the robust pleasures of life. 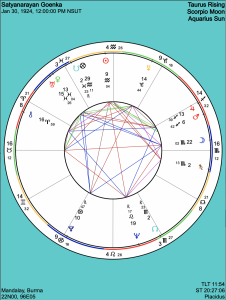 Not a bad likeness of Goenka, sort of a Jupiter’s Guru or a Teacher’s teacher. “Inward bent” sort of jumps out here. Of course Goenka has many other traits, and he was just a regular guy really. A regular guy whose personal pain became the healing for many others.

With the same text we can turn to Goenka’s Sun. The Sun is a symbol of our self-esteem, our soul, and the place where our vital core is described. The realm of the Sun is about our power and will, vitality, father figures, purpose, and heart. A birth between midnight and noon would give us 8 degrees Aquarius. Carelli says for this location:

St. Paul struck by the lightning flash of the Spirit on his way to Damascus.

A huge inner power, immense mental horizons. A courage exempt from earthly ambitions, the utmost physical or mental combativeness; an orator’s, a polemicist’s, or a critic’s temper; brisk and watchful brains and nerves, capable of the timely and quick execution of any task.

The native is likely to embrace religion, turning his back to the atheism or agnosticism he formerly professed, or to convert himself from a lower to a higher form of faith; and then it will just fit his nature to try to convert others, to become a missionary or to preach in his own country. However, he is certain not to get at truth gradually but by a sudden flash, and he is apt to get down at once to the task he feels himself entrusted with, as resolutely and firmly as his fiery personality bids him.

“Watchful brains and nerves” describes Vipassana meditation to a T. Goenka asks the meditator to be alert, and notice the breath as it goes in and out. Observe without evaluating. He will tell you to be vigilant “like a gatekeeper, like a watchman.”

Carelli draws the picture quite well in his book written in Italy in 1943 (he used meditation to complete his work, focusing on the 360 degrees for an entire year). He thought other sources did not provide enough material.

Another author, Sepharial (writing in the 1890s) says of this same place in Aquarius:

Quick, energetic and alert, [the person] will make considerable progress in his particular walk in life, and may be the means of convincing the most skeptical concerning certain matters of a celestial and ethereal nature…he will let light into dark places. His departure will be sudden, but will not transpire till he has done some work of magnitude. It is a degree of Conversion.

Interestingly, Goenka addressed the UN General Assembly in New York in August 2000 and he got great applause when he said he was in favor of conversion, not from one organized religion to another, but conversion from misery to happiness, from bondage to liberation, from cruelty to compassion.

Finally, to check on Goenka’s Venus. Venus is a planet that we forget is also a guru/teacher, especially around scientific design and sublime creativity in an applied way that benefits everyone. Yes, it is celebration and romance, too, especially showing our attitudes toward love and affection. Venus is also called Lord of the Birds, and rules plants that are movable, the vines and spreading ferns in our back yards. And fashion, sociability, stamina, integration and more.

Goenka’s Venus is exalted in Pisces, its most efficient sign. It is also in a super tight 90 degree angle with Jupiter in its own sign. This would greatly expand the Venus quality which is already at a highly powerful placement. And throughout his life, whenever that Jupiter is activated by a passing planet, so is the Venus. And likewise, when the Venus is heightened (say by a passing Sun), then the Jupiter is also keyed. This is a huge dose of idealism and extravagance; quite a robust combination. Add Uranus close to Venus and you have a bit of a spirit on fire, or an electrical current that is spread around in its watery Piscean setting. Lightning over still water comes to mind. 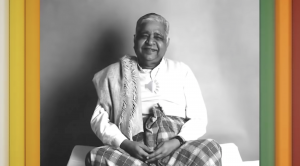 The mind brings us back to Chiron in Aries. As the first sign of the zodiac Aries is in the top of the head and the upper face, with the other signs placed in order through the body all the way to Pisces in the feet. The wounded healer for Goenka is in the head. He’s even a wounded healer of the mind. Carl Jung and Edgar Cayce also had Chiron in Aries.

Vipassana today has over 200 permanent centers in 94 countries. Check out www.dhamma.org. It is sometimes called the boot camp of meditation because as a new student you have to sign up for the full ten days. You can’t try it for two days to see if you like it because it takes ten days to learn the practice. It can be hard to carve out the time to get away from it all, and it isn’t really a vacation. It may feel more as if, for ten days, every day is a Saturday.

People attend from all walks of life and its all free, donations only. Some come to meditation after hitting what felt like insurmountable obstacles. Some are there due to chronic pain. Others surprise you: I met a couple of young guys who do extreme sports and they did the ten day retreat because it was the only thing left that looked harder than parachuting off a mountain.

It’s a method for householders; people with jobs and families. Don’t worry, no one will ask you to become a nun or a monk. My advice: just go and follow the rules. Don’t knock yourself out. Work patiently and persistently. Once I tried to meditate in the late night hours and I kept flashing on a lost dog at midnight, peering through a ratty old screen door. I realized, no, this is the time the schedule tells us to rest. Let’s just follow the guidance of the course and so I went back to bed.

The retreats aren’t in all fifty states, but they are in 15. You don’t have to believe it. Just give it a try and see for yourself. Personally, I’ve found that happiness is closer than we think. We tend to look way over there for it, or way out in front of us and it’s closer than that. It’s right next to us, just waiting for us to let go of what the mind keeps insisting.

To learn more about the lineage, I suggest the film From Myanmar to the World or try a sample of the method here.

Special thanks to Asia Barong of Great Barrington and Jay Michaelson at Ten Percent Happier. Be Happy!

If you enjoyed this article, consider ordering a personal reading from The Ness of Astrology. You won’t be disappointed.