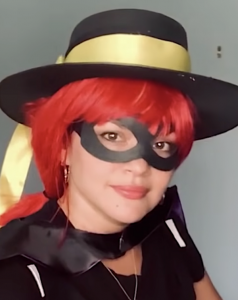 Some say heaven is a place on Earth and I say heaven is wherever Norah Jones decides to go walking. Perhaps I exaggerate. Maybe it’s more accurate to say that Jones is simply an angel sent here to heal us and her only disguise is a cape to cover her beautiful wings. Am I pouring it on too much? Well, I’m not if you take a look at the planets in her birth chart.

The condition of a planet when it is located in its most efficient sign is called exalted. Yes, a Cancer Moon is strong and brings great blessings. It is right at home. Yet we find its exaltation sign is Taurus. Of course, it isn’t all roses all the time (which I will get to in a moment), but it is where the Moon flows unimpeded and will bring great benefit throughout the lifetime. Many people have one exalted planet. I have done a few readings for people who have two exalted planets. More than that is truly rare. Old stories from India describe the Gods as having birth charts filled with exaltation. Lord Rama, the pre-Krishna deity is said to have had Mars in Capricorn, Venus in Pisces, Sun in Aries, Saturn in Libra and Jupiter and Moon in Cancer. These are all exalted placements (in the case of the Moon, in its own sign). This arrangement in the sky would put his birthday in the year 5,114 BC. People this powerful only show up every so often. The great divine does wear many hats and has many faces.

In the year 1979, on March 30th over New York City at night we find four heavenly bodies happened to be exalted at the same time. If you were born then you would have Jupiter, Venus, Moon and Sun all exalted. And that’s the time and place of the birth of Norah Jones. The 11pm birth time comes from a Blender Magazine article from 2007, so not an airtight source, but please let me know if you find a different time. She might not want to get this extra attention, so let’s keep this jewel of a secret just between us.

She would appreciate the discretion. After her debut album Come Away With Me hit 1 million in sales she asked her label if that was enough maybe. She was okay with that. But it went on to sell 26 million and counting. That’s a lot of attention. 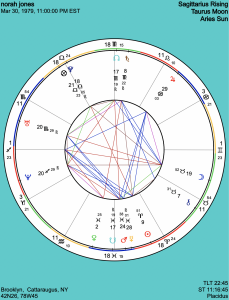 It’s this shyness that makes Nora so captivating. And her voice seems to come through as easy as butter on a fresh pastry. That’s how it appears anyway. I’m sure she has worked hard on her instrument and keeps it fine-tuned to keep healing all of us mortals. We are thankful. More pastry, please.

Like Luciano Pavarotti (see my article The Smile Heard Round the World) Nora’s Venus is opposite Saturn so there is a seriousness to her art, and even a rainy-day coziness to her ideas of musical design. This is also a combination that ensures a long career that ages well, so we have a lot to look forward to. It’s not surprising she can sing a masterful version of Blue Christmas (Saturn opp. Venus). Obviously, this is just one part of her chart and a full reading would yield a ton of more detailed information.

She shares a lot with Elton John. Both are Sag Rising with Taurus Moon and Aries Sun. They both have Chiron, the wounded healer, at 7 degrees and at opposite ends of the zodiac. The possibility for being healers to each other is high. Elton is a little more Uranian and there could be some wounds opened if they met for a heart-to-heart, but the healing would come soon after. Norah has the potential to be a healing presence to anyone no matter what she does, whether she is singing or not.

When people have exalted planets, a lot of things in life come easier. An exalted Moon brings many loyal friends and followers. An exalted Mercury can make someone a gifted public speaker or a dazzling drummer as Mercury rules Gemini, the sign of manual dexterity. But there can be difficulty. When things come easily a person can fall into existential angst. This is the malaise that can really bring strife in the life and sometimes the exalted person feels adrift. They are content, yet not. The drive isn’t always there, because it just isn’t needed. This is okay, but over the years they can truly feel they are missing out. We need struggles to overcome and lessons to learn; sometimes meeting a challenge really brings fulfillment. The prescription then, for the angsty person, is to be bold. Put those exalted planets to the forefront and step up. Give yourself a microphone or a platform and see what you can bring to the world. The more you show up, the more you will meet and surpass those obstacles. This brings lasting satisfaction in life. 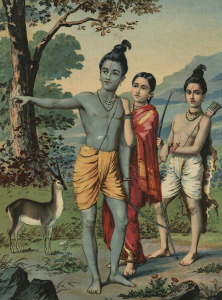 Maybe the best lesson here is also to not assume that the lives of divine beings are full of roses. Lord Rama had a hard period when he was killing demons in India and at one point his bride was kidnapped and whisked away to Sri Lanka. He also was exiled to the forest for fourteen years and had to wear tree bark for clothing (well, that’s not so bad maybe – for me it might be a step up). And I am sure Nora Jones has rough days, too, and she might have to face demons that we never see. Demons more scary than Keith Richards even. But we can sleep a little easier with Nora at the microphone as she fights evil in the world, and conquers personal demons that she’s slaying for all of us with that golden voice of an old soul. Look for her new live 14-track release coming April 16th.

Order a professional reading from The Ness of Astrology! You won’t be disappointed.