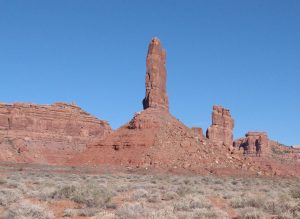 This spring I had the lucky chance to visit Monument Valley, Utah. Truly a once in a lifetime trip, a real bucket-list item. This land is part of the Navajo Nation and is a breath-taking landscape that you won’t find anywhere else. Sacred was certainly the word for me during those two days of camping at the foot of those towering bluffs. It is also where some of the finest golden age Hollywood films were made and you can recognize the giant rock formations seen in many old westerns. It does not disappoint. I had thought it was a few impressive crumbling mesas in the red desert and that it is, yes, but it’s much more than that. It covers an enormous territory and you can drive for hours and it just doesn’t end. You reach the Valley of the Gods road and it lives up to its name. Huge crags watch you go by in your tiny mortal vehicle (don’t go without the right wheels) and the shadowy 800 to 1000-foot high bluffs reach as far as you can see, looking older than the Earth. As if they were here first, and then the Earth was made after that.

I set up a tent there, my portable oxygen concentrator in a handy carrying bag. Everybody has one of those, right? I also carried some mantra rosary beads in the same bag, not realizing they are sort of complements to each other; both are crucial items for my health. After dark the stars were blazing of course, with so little light pollution out there near the Arizona border. It happened to be a new moon, the night of May 11, 2021. It was the only time in my life that I saw Venus, Mercury, Jupiter and Saturn all in the same night sky (not at the same moment). I had to wake up at 3am to catch the last two. But I was so glad I woke up for it; Jupiter was like a galactic lighthouse on a faraway shore, Saturn was quite sobering and the Milky Way was bright enough to cast light shadows.

The book I was reading was the Pistis Sophia. I wanted to look at some Christian gnostic teachings, not realizing that astrology plays a big role in the book. The only Christian astrology I have read is William Lilly, the 17th century Englishman who foretold the fire of London and was so accurate he was later accused of starting it. His work is great to read and was especially wonderful as my first intro to the study. 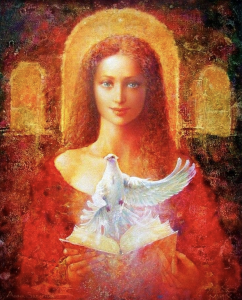 I am no expert on gnostic texts, but I can give you the astrological high points (from the 4th Book) and if you have an interest you can get a copy. It explores the possible teachings given by Jesus of Nazareth in the 11-year period after his resurrection. The players are Mother Mary, Mary Magdalene, Martha and the twelve “disc”-iples. It is quite involved and explores the nature of the spheres of heaven and the spiritual cosmology of where souls come from and how the universe is put together. Not exactly light reading. It is a compilation from multiple ancient sources, probably written in the 3rd and 4th centuries. It has been proposed that one of its authors was Valentinus, a gnostic teacher born in Egypt who founded a school in Rome.

My interest peaked when I read Jesus speaking this passage: “I will give the mysteries of the 12 aeons of the rulers and their seals and their ciphers and the manner of Invocation for reaching their regions. In order that ye may be called children of the Fulness, perfected in all the Gnoses, and all the mysteries.”

The 12 aeons of the spheres are also called houses in the text, and they are described as places where we can see how we are carried away into sin, how our lives sometimes separate us from God. The names of the aeons are exactly what you might expect: water-man, archer, lion, crab, ram, bull, scorpion, balance, and so on. The same imagery of the zodiac we use today. The planets are also described: Boubastis is another name of Pistis Sophia herself, the divine feminine embodiment which we would call Venus, and Sabaoath is referred to as Zeus and thus is Jupiter. Mars has an especially robust name: Ipsantachounchainchoucheoch. Saturn is Kronos, aka Orimouth and Mercury is Hermes, Chainchoooch. Yes, with three o’s.

The Sun and Moon descriptions are fascinating. The Sun is a great Dragon whose tail was in his mouth, drawn by white horses. The Moon is described as a ship drawn by two white bulls and steered by a male and a female dragon. A babe is on the stern, and guides the two dragons. The prow of the ship has the face of a cat. 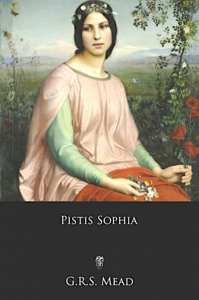 Jesus tells us in the text that these teachings came from Yew, the father of his father. Jesus also says he himself appeared to Elizabeth in the form of the angel Gabriel and drew on powers of the high heavens to bring to her body the soul of the being that we came to know as John the Baptist (my personal favorite being a desert nomad like myself, at least this week). The demon rulers are described in the book, the beings that carry us away from a healthy life. Hekate, Typhon and Yachthanabas to name a few. I don’t know much about demons and I don’t care to study them. I figure I have enough on my plate with watching the news lately.

At this point the text got a bit too deep for me, and a lot of words were sailing over my head while I was eating apples, bread and cheese in a tent in the desert. For a break I got out my laptop and watched the film The Cat Returns, from Studio Ghibli. This is first-rate anime and I highly recommend it. I guess I watch movies like this because they are a pleasant reminder of two wonderful miniature humans that I used to spend a lot of time with. They sometimes sat in high chairs at the dinner table and put away a lot of juice boxes. They taught me so much! So It’s the story of [insert warning of a spoiler alert I’m not kidding, jump to next paragraph if you must] a girl who saves a cat’s life and in return the cats kidnap her and take her away to the Cat Kingdom and try to make her into the Cat Princess, almost killing her in the process. She grows cat ears and whiskers and is rescued in the end by a flock of crows. It’s all quite fun, a nice antidote to gnostic pondering. 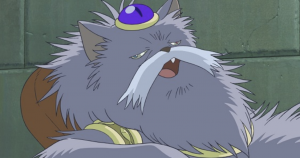 Please don’t mistake my armchair pseudo-intellectualism for not caring. I do care very much and I think the Pistis Sophia teaches us all a profound lesson. For the mysteries are really about how to steer our lives closer to a divine principle and how to avoid dis-aster, how to live a rewarding life and get past the dark times in order to find some measure of equanimity. And I think that true, mindful, thorough birth-chart astrology can do that quite well. It shows us the areas in life where we need to use our free will to rise above the difficult spread of stars we’re sometimes given at the moment of our birth. The Pistis Sophia confirms that this was understood by early Christian writers and gives us all a lot to consider. It is quite serious. I just don’t want to bore people with too much sermonizing (my Venus, Neptune and Mars are all in the 9th house).

So what is the remedy given in the Pistis Sophia? How do we address the issues we discover when we study the signs of the sphere? Well, it is the “invocation for reaching the divine regions” – the recipe used to appeal for compassion and forgiveness. Jesus explains to everyone present that they should set out wine and loaves of bread in a certain way, add vine branches, some water and a fire source. Then invoke the divine name, the “father of all fatherhood” is the phrase he chooses. And then humbly ask for forgiveness for the souls in our circle (perhaps that’s everyone), and ourselves personally, and ask for troubles to be blotted out, troubles from actions committed knowingly and un-knowingly. And then, do not forget, he says to ask for a sign that the forgiveness has happened.

As I thought it over, it is clear that this is the same principle used in most religions, perhaps in all religious practice in part. We all have so much more in common than is assumed. In Hindu ceremony, we invoke the divine name, offer prasad (food), water is used, and fire, and we petition for alleviation of suffering and we offer gratitude. These fundamentals from far East Asia are the same as the practice Jesus describes in the Pistis Sophia. The speculators who wonder if Jesus went to India during his missing years may not be off the mark (or the journey was done by those who wrote about him). It would have been easy to make the trip on the Silk Road, popular in his time.

And I can say this method works. With a clear intention and a sincere heart you will not be let down. Stop watching the news for a bit (note to self), seek out the religious path of your choosing, and actually do what the teachings suggest. You may be surprised.

Jesus also adds that we should not share this with everyone. Some would knock such teachings, to their own detriment. So let’s keep this article on the down-low. You don’t have to spread the word about the Pistis Sophia, but definitely tell everyone you know about Monument Valley at the Navajo Nation (it really does feel like you are traveling on the surface of Ipsantachounchainchoucheoch). And watch The Cat Returns! You will not be disappointed. 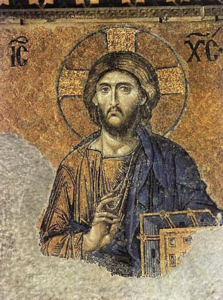