My neighbors used to talk about one old guy who came to the local dances and everyone knew this was a person who had a Story to Tell. We didn’t know what the story was, but when you looked at his eyes you could just tell that something major had happened. Somewhere in this person’s life was a tragedy that might have been so complex that he had no words to tell it. The story became etched into his countenance. Great love was there, too, because it was the lost love and lost joy that made the story so monumental. This is a quality we can see in some of our own astrological charts if we take the time to do the research.

Luciano Pavarotti lived this life. The son of a baker who sang in the local choir at Modena, he always insisted that his father’s voice was superior to his own. Luciano was in a coma when he was a kid and it was coming out of that place of danger that taught him to always be optimistic. It was a philosophy that would serve him well. Periodically, he was the recipient of great achievement paired with pain and loss, just like the mask of comedy and tragedy that is displayed in theatres all over the world.

Much of his success was met with high praise and harsh criticism. He was called the King of the High C’s when he was only thirty years old because he nailed a role that called for 9 high c notes from the tenor. But he also was called the King of Cancellations and was banned from the Lyric Opera of Chicago because he missed so many shows, mostly due to exhaustion.  Opera fans chastised him for cooking spaghetti on a television show. He got flak for singing with such common creatures as rock stars like Bono, Eric Clapton, and even the Spice Girls. At the height of his career his daughter fell ill with a serious and rare disease.

Later he fell in love like a blazing comet and married a younger woman, but she soon became diagnosed with multiple sclerosis. In 2003 he was overjoyed to become the father of twins, but one was stillborn: Riccardo. The Guinness Book of World Records shows him having more curtain calls than any performer in the history of show business. 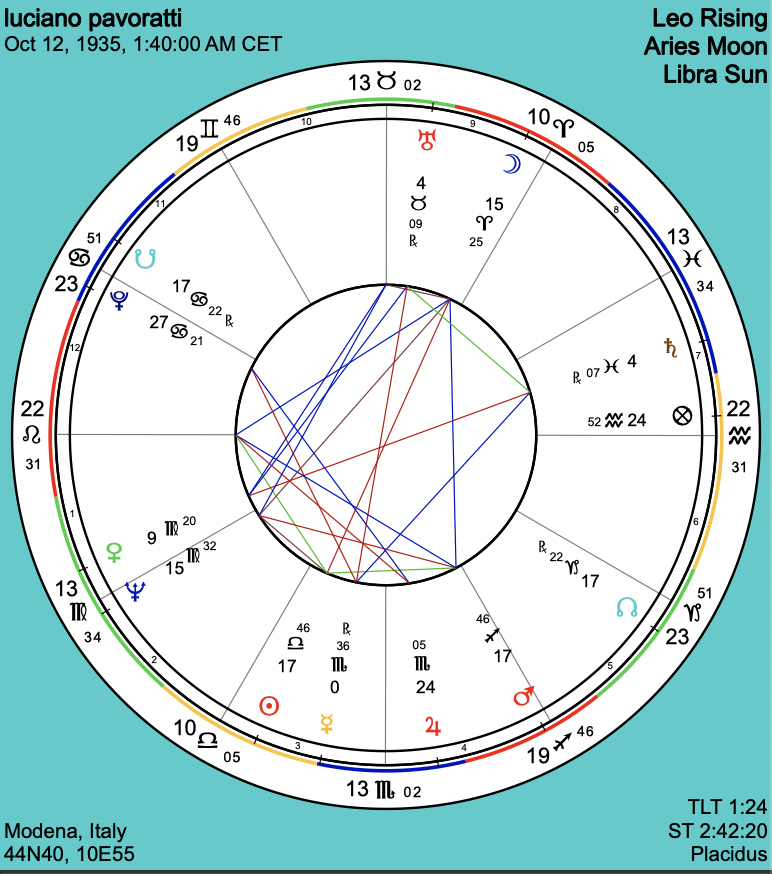 His natal chart shows this polarity of highs and lows when we see that he has Saturn directly opposite Venus within 5 degrees of being exact 180º. This is a constant push-pull game between: love and death, joy and sorrow, accomplishment and obstacle, and punishment and reward. Good times paired simultaneously with pain. These are the simplest interpretations of these planets, yet sometimes those are the most prominent in a person’s life. Some astrologers might say that since the transiting planets will always trigger this opposition, the person will have a silver lining around most dark clouds. They will also have a dark lining around most silver clouds. Polarity is repeated in other planet arrangements: Sun and Moon, and Mercury and Uranus.

He was a famous dinner guest in many homes, where Venus energy would show up in elaborate displays of flowers. But the Saturn symbolism of Lord of Rules was ever present because he would often call the host days in advance to ask about the menu. He would even insist on bringing grocery bags of ingredients himself, showing up hours early to make sure things were done properly in the kitchen, being notoriously demanding.

This balancing act of joyfulness juxtaposed with rigid control (Saturn and Venus) appears in his marriage, his daily work, but also in the content of his most memorable performances. Canio, for example, is a clown who sings of laughter in the midst of pain in Pagliacci:

Change all your tears and anguish into clowning:
and into a grimace your sobbing and your pain…
Laugh, Pagliaccio, at your shattered love!
Laugh at the sorrow that has rent your heart!

Sometimes laughter is the only way to survive the tears. Venus is the antidote to the trials that Saturn brings and Pavarotti was like my neighbors’ friend at the dance; tragedy had become etched on his countenance, but also within his voice. The voice by the way, is shown in a 2nd house Neptune all receiving the gaze of the Sun, Moon, Mars and Rahu.

He used to demonstrate the Saturn-Venus pairing backstage by telling the crew “I go to my death” just before he walked out onto the stage, which is where we thought he was most alive. He feared that Saturnine death, yes, but it was paired with the celebration, the applause and the artistry of Venus right at the same time. He used to say it was good for a singer to be constantly scared. Before shows he would look for a bent nail on the floor of the theatre to keep in his pocket for good luck; a hard, cold piece of metal that helped summon auspicious events.

If we explore further we find that in Indian astrology his Moon’s lunar mansion is Revatika; a position in Pisces where Venus is exalted, and it’s known for people who create a musical spell. Spellbinding is the word. The song of safety. A bewitching allure is present that can even lead to a cult following. It’s often called The Pied Piper mansion because people with a focus in this region of the sky can hypnotize people with attractive tunes. They also are interested in saving children. If you remember the fairy tale, the piper goes to the small town of Hamelin, Germany in the year 1280 where the local gentry are sort of mean-spirited. They refuse to pay the piper when he rids the town of rats (by means of his flute) and in retribution he plays a tune that leads the children to follow him far away into the very side of a mountain, never to be seen again.  The museum today in Hamelin shows the original town clerks’ memo from which the legend arises. A simple note in the log dated year 1380 says “it has been 100 years since our children left us.”

Pavarotti was capable of this kind of musical spell, but he also was known for raising millions of dollars with Princess Di to dismantle land mines which injure or kill kids every year. In 2001, the UN High Commission for Refugees awarded him the Nansen Medal, and in 2005 the Red Cross gave him an award for services to humanity by starting schools in Tibet, Guatemala, Kosovo, Cambodia and Bosnia.

This is Revatika, the Mercury ruled mansion of dreamy songs, humanitarian ideals, and troubadours on the pastoral highway. The deity that protects these folks is called Pushan, the Shepherd. Revatika people are lovers of animals; they are horse-whisperers and adoptive rescuers. Another famous person with Revatika in the chart is Angelina Jolie, who also works internationally to save children, and Stevie Nicks who weaves a spell that has captured many of us. Did I mention that we were married once? It was brief, in the 80s. Well, she didn’t know about it, but it was a memorable time for me.

So the benevolent spirit that guards Revatika seemed to follow Luciano all of his days. In addition, sadly, Saturn made his presence felt. Yet, that is like any of us and it may be the pain of Saturn that makes us better appreciate the qualities of Venus.

Pavarotti taught his kids the same thing I tell people who have strong Saturn qualities in their charts: learn to see sickness or obstacle as an opportunity. It is a way to see where the blessings really are in your life. Learn to laugh at the pain because sometimes it’s the only way to survive. Be the survivor!

Special thanks to Barbara Pijan and Dennis Harness for limitless wisdom. 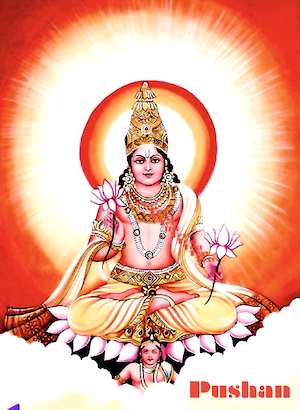 New Book on the way