The long awaited Astrological Book of Life is finished.

The book I was always looking for, but could never find: an introduction to the origins of astrology from around the world. This is the story of a young dragon school teacher named Vaya who rides a train from Milan to Rome and has a long talk with Bhakta, a monkey carpenter from India. He restores antique train cabins. Together, with an old crow, they discuss the murky past of early planetary symbolism and ancient texts. Here is a sample:

Bhakta arranged his tools on the table and his tail hovered in the air. “A long illness appears tragic,” he said, “yet it is a temporary setback that brings a lesson.”

“Not a lesson I care to learn,” said Vaya. She stroked her chin beard while she listened to him talk.

“True. There is pain. But how often do we look at what happens during the setback of illness? We stay home. We learn to accept help. We find gratitude for others. We learn about the trials and setbacks of other people. One could say a long illness teaches us lessons that make us more complete.”

A rare silent moment filled the train compartment. Vaya felt her toes, happy in those Zumi-G boots. Jeero the crow sat still, his eyelids heavy. Bhakta turned back to his work. He began sanding a section of oak window trim with a piece of sandpaper wrapped around a block. He moved methodically. Finally the crow spoke.

“I am happy that my life has had interesting trials to break up the long periods of complete obstacle.”

Bhakta laughed. “Well said. Jupiter notices your tongue. But obstacles and trials, this is the nature of Saturn and Saturn can show pain in a person’s life, I don’t want to underestimate that.”

Vaya said, “But I can learn things without having a long illness.”

“Yes,” said Bhakta. “You can learn easier because when you were born Saturn was probably in a more positive place in the sky. Others were born under a Saturn that was square to their Moon. If that’s the case, lessons are harder to learn. You’ve met people who we say just never learn, right? They can have an advanced diploma, yet they repeat the same mistakes because they did not learn the lesson the first time around. This too is Saturn. He can also provide the discipline it takes to really succeed. But make no mistake, he can bring sorrows that the Moon, Venus or Jupiter will never bring.”

“Yay for Saturn,” said Vaya. She didn’t know what to make of this monkey. He was so chatty.

“In the ancient world they basically had the same understanding of Saturn that we have now. The city of Harran in Turkey thrived for about 3000 years until it was destroyed by Mongols in 1251, and the monks of Harran left us a prayer to Saturn that could have been written by any astrologer today:

Lord, whose name is revered, whose power is widespread, whose spirit sublime, O Lord Saturn the cold, the dry, the dark, the harmful….crafty sire who knowest all whiles, who art deceitful, sage, understanding, who causes prosperity or ruin, happy or unhappy is he whom thou makest such. I adjure thee O Primeval father, by thy great mercies, and thy noble qualities, to do for me this and that!

“They spoke this prayer, several times, while burning incense made of opium, grease and goat urine, wearing black, while in a place where they could gaze on Saturn in the night sky. But there is no devil here, they aren’t praying for death and destruction. They aren’t wearing black because they like evil, that’s not what is happening. They wear black because it is one of the symbolic colors of the planet. And the urine is probably an ingredient that helped make the incense burn longer.”

“As far as opium goes, I will say that substances are used in many religions. Many Christians still use wine today when they take communion. These Saturn worshippers were not so dissimilar to anyone who worships a God or Goddess today. They were appealing to a symbol that can represent obstacles to their livelihood and their health.”

Vaya asked, “Do the planets actually cause illness?”

“Ah, that’s the million dollar question. Do the planets cause the events? I tend to think not. The old saying is “as above, so below” meaning that the planets are a mirror or a map to what happens here. They reflect. You’ll hear it said, they do not cause, yet they correspond. They tell us when and they tell us to what degree, sometimes where, sometimes why and how. Does Venus send her rays across space to make a person attractive? Probably not.”

“Or maybe she does,” said Bhakta.

“Maybe she does,” he echoed again.

“Some writers, especially in more esoteric astrology like Rosicrucian, claim that yes, the planets do cause events directly just as the Moon effects a woman’s body every month. The other planetary effects are just more subtle. We accept that radio waves can traverse the solar system without disruption, so it’s not so wild to think that a planet can send us waves at the moment of birth or even at every moment. In fact, what if these rays do exist and they are so prevalent they are integral to everything, every single thing in life, all the time? Would we know? Or are we moving through the rays like fish move through the water? Fish chew their food and explore the sea bed. Does a fish know about the water? I’m not so sure.”

The Astrological Book of Life ©2020 by Timothy Ness         nesstimothy@gmail.com 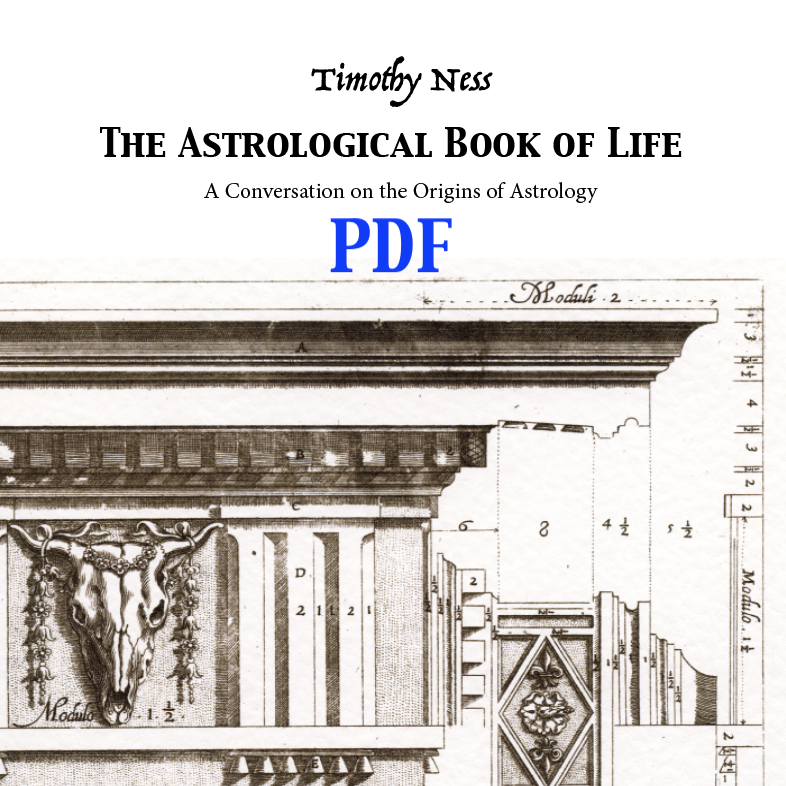 This 188-page PDF is the entire Astrological Book of Life. Order a PDF via dropbox here, or your own downloadable version from the Store. 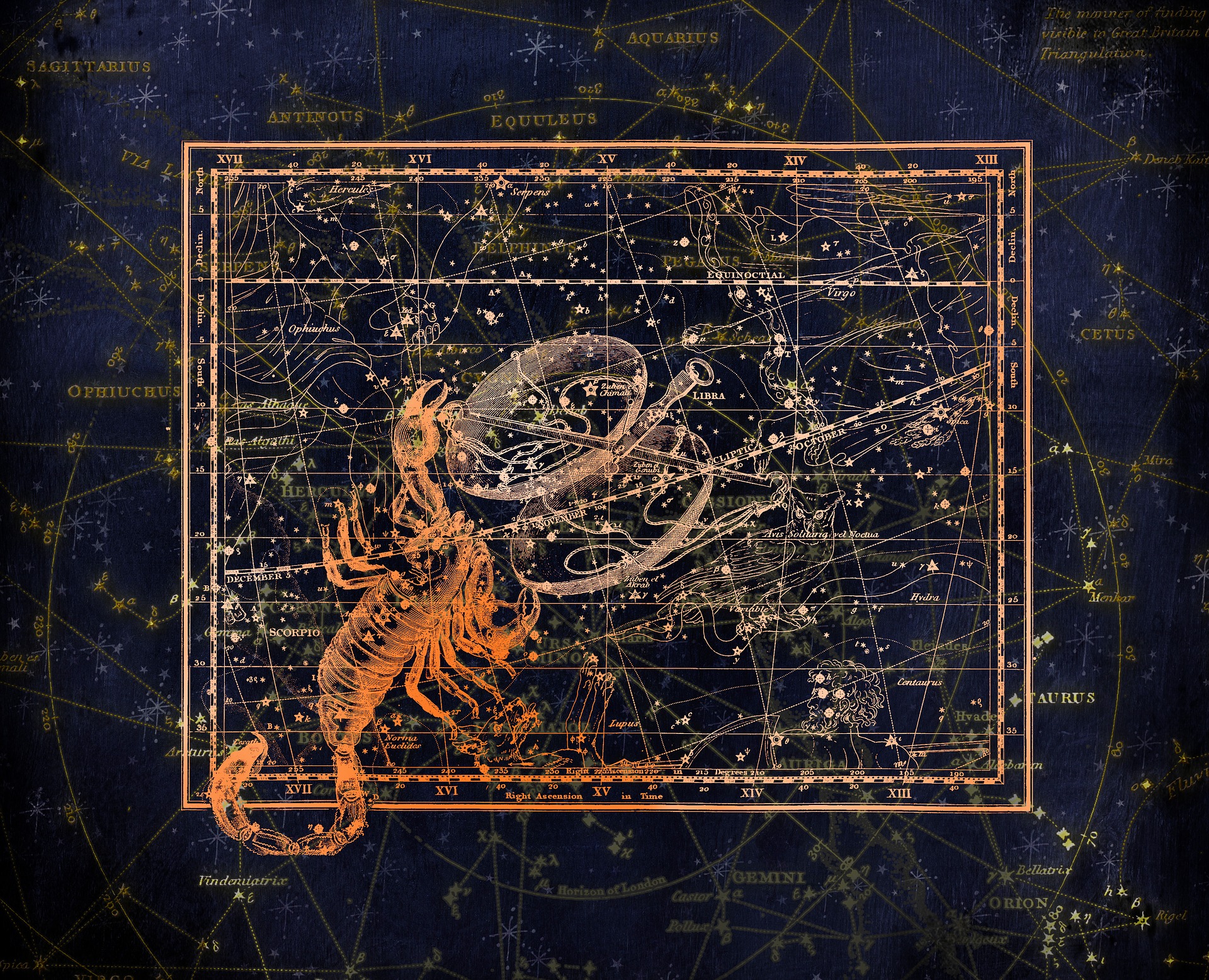