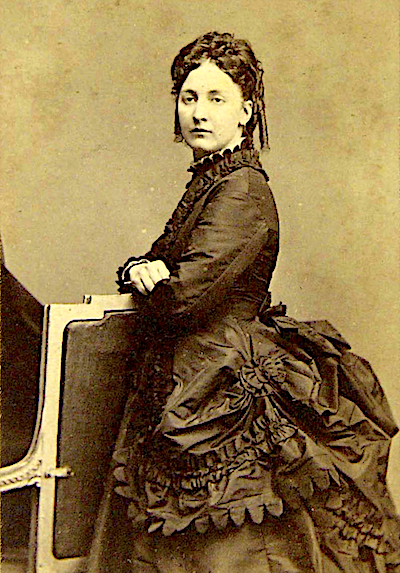 A note arrived from an old friend asking me to help him choose a wedding day using astrology. This I did not expect. The philosophy here is that a zodiac chart reflects a starting point that will show the nature of whatever begins at that moment. A person’s life starts at birth and a marriage starts with a ceremony. Therefore, a chart based on this time can provide insight into the years ahead (pick a good wedding time, get a better marriage is the idea). This is dubious.

I think marriage is a great thing. So great, in fact, that I believe we should all get married two or three times. It’s the best invention ever. I wasn’t so eager to answer my friend, though, because an astrologer who helps choose a wedding date could really get into trouble down the road if the marriage gets rocky. I could see myself sitting in a restaurant in five or six years and suddenly a bowl of pasta comes sailing into my lap, if my friend decided I picked the wrong date. So I thanked him for the idea, and politely declined. I told him to sit down with his betrothed, rely on intuitions, and choose a good day based on average daily temperatures and no conflict with local sporting events. I explained that Saturn and Mars are always somewhere during the wedding, so it’s not like you can choose a time when they’re asleep on the job. Whatever day or time you pick, you will eventually have delightful obstacles to work on.

Months later I started to read about weddings and astrology and I now realize that some days are definitely to be bypassed and others are to be circled and reservations made way in advance. I might give my friend a call.

The story that came my way is about Maria Vittoria dal Pozzo, an Italian who was born in Paris in 1847 (full name Maria Vittoria Carlotta Enrichetta Giovanna dal Pozzo della Cisterna). Her parents were highly influential political players. Her father was a Senator and her mother came from Belgian nobility. She grew up riding horses and was taught seven languages by her tutors. She would become the Queen of Spain at the tender age of 23, just three years after her wedding to Amadeo, son of the King of Italy (whose full name was Vittorio Emmanuel Maria Alberto Eugenio Ferdinando Tommaso de Savoia). I should have given my kids more names, what was I thinking?

The King was not in favor of her as a choice, though, because she was not of high royal birth. Sometimes the father in law just takes himself way too seriously, right? Her aunt had married the Prince of Monaco and she was a Princess in her own right with many titles, but this still didn’t please the King. Through the course of her short life she would be called Princess, Marchioness, Countess, Lady, Co-Lady, Her Highness, Her Royal Highness and Her Majesty.

So Amadeo’s Dad, truly a great leader, may have been (at times) a bit of a stick in the mud. Maria, on the other hand, was of a more noble birth than the King. At least astrologically speaking. With a Sun and Mercury in Leo and an exalted Jupiter, plus Moon and Venus in their own signs, her future looked very bright. Somehow, love prevailed and the son was given permission to marry this blessed soul.

The groom had been a major-general in the War for Independence against Austria, but he was still a young man, basically. He was probably doing his best to please everyone around him and most of all not make his father upset. He was 23. She was 20.

The day of this ill-fated royal wedding in northern Italy was May 30th, 1867, the groom’s birthday. If we create a chart of the heavens over Turin for that morning we find reason to be nervous. Mars was in a 90º relationship with both Saturn and Pluto, usually called a T-square. That would be enough to avoid the date as a wedding day or even cross it out for almost anything; not a time to begin any long term project. Mars here is the highly stimulated center of a three-way disagreement with Saturn and Pluto, and Mars can reflect events that look like a misguided teenager who punches first without asking questions. And this Mars was in Leo, the sign of royalty, celebrations and the divine symbolism of rulership lineage. Pluto was at 15­º Taurus which is a highly sensitive degree (See A Walk Through the Divine Gates). Let’s say Pluto was given an opening to walk through and make his presence known. As the higher octave of Mars, Pluto (square with Mars and Opposed by Saturn) tells us the day was primed for major transitions and probably violence.

The plan was to have a royal procession from the palace in Turin to the cathedral (which was built in 1491 and still houses the Shroud of Turin today). Then, after the ceremony, the procession was to make its way to the station where the newlyweds would board their honeymoon train, probably bound for the south of France.

The first omen of a bad day came when a Colonel, on his horse waiting to lead the procession, keeled over from sunstroke. It was probably that heavy uniform. Then, when the procession was ready, the gate wouldn’t open and they found the gatekeeper lying in a pool of blood. It could be surmised that someone took seriously that Amadeo should not marry Maria and this was one way to try to stop the wedding. However, the plan was rolling into place and eventually they made their way to the church. The ceremony seemed to have happened without incident, but immediately afterward the best man shot himself, probably mishandling his weapon during the pomp and fanfare.

They made their way to the station and as the honeymoon train approached, the station master somehow lost his footing and wound up under the wheels of the train. This was the last straw. The King forbid anyone from boarding the train and ordered everyone to return to the palace. He had allowed the wedding against his better judgment and now he just wanted no more deaths or injuries. So the procession assembled again and they headed to the palace, but on the way Francesco Verasis (the Count of Castiglione) was thrown from his horse. He had been riding alongside the bridal carriage and now he was under the wheel with one of his uniform medals pierced into his own heart.

Wow! Today our main matrimonial concern is if the mother of the bride has a little too much to drink. I’m not sure how the rest of the day went, but there was an effort from the King to keep the accidents out of the papers because he thought it would be a story that would haunt his lineage.

So the heavens reflected increased chances of trouble on that day. If things weren’t already dubious enough, the couple’s natal charts show a real cauldron brewing. We find that our over-pressured Mars was conjunct the bride’s natal Sun and Mercury, kind of a double-whammy. Pluto was exact square to her Sun and also was exactly conjunct the groom’s Mercury. Additionally, since it was his birthday, the Sun was lined up nicely with his natal Sun at 8+º Gemini. In the tropical zodiac this is where we find Aldebaran; a royal star known for integrity, but also associated with warfare and violent death. 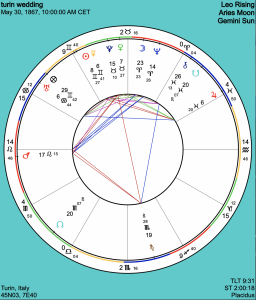 In time, the wedding couple moved to Spain as King and Queen. During this time Maria became known for her work with local charities and health and education improvements. With Concepción Arenal, she established the first children’s nursery in Spain which grew out of a need to support the washerwomen of Madrid who worked long hours along the river banks with their kids in tow. They never forgot her and she is still honored in the country where she spent only a few years.

Maria returned to Italy to raise three kids of her own, but sadly her life was taken early due to tuberculosis. She died at 29. She will always be remembered for her virtuous character and humanitarian deeds.

Interestingly, this theme of “not good enough” was visited on her husband Amadeo, too. When he was King of Spain he was not welcome. Court officials told him not to leave the palace for his own safety, and as a newcomer to please just sign documents without asking too many questions. He would leave Madrid three years later without any ceremony. He just packed up and went back to Turin.

A look at his natal chart shows that his Mars and Saturn were both in opposition to that angry Mars on the wedding day; more planetary correspondence with violent obstacle. This also means that those planets in Amadeo’s natal chart were also in direct opposition to Maria’s own Sun and Mercury. So this was a couple that would not have a warm and fuzzy relationship regardless of the unfortunate wedding day. 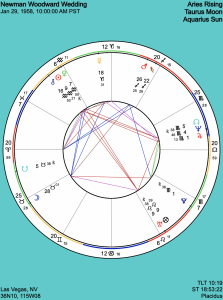 After considering this ill-starred, dis-aster-ous wedding, I checked into another wedding day just to compare: January 29, 1958 in Las Vegas. A couple famous for a long successful union: Paul Newman and JoAnne Woodward. I don’t know many details of their marriage, but they came to be seen as an emblem of strong partnership. They championed a rare animal: a 50-year marriage in the entertainment industry.

On their day, Venus and the Sun were conjunct and the Moon was exalted in Taurus, so bravo! This is more like it. Also, although I don’t know the exact time of their wedding, an odd cluster was in the house of partnership at 10:00am (the house of health by noon, and the house of pleasure by 4pm): Jupiter, Neptune and Rahu, all within 4º of each other which could mean “cravings for blessed escapism” or “striving for divine bliss” and all three were in Scorpio all day long, the sign that can represent our most ambitious carnal desires (the Ascendant degree for Paul and JoAnne’s physical bodies (and outward identities) is about a half degree from each other, too).

I have to add that Scorpio (people often forget) is also the sign that has a high degree of kindness. A lot of planets in Scorpio equals a truly kind manifestation. When it comes to weddings, I think that’s the key and the lesson. In the end, kindness wins the day.